Another loaf cake recipe is here!

While I actually wanted to make bread for the first time, flour and yeast in supermarkets are non-existent these days. So, a loaf cake recipe it is! I’ve found that if I don’t want to spend too much time making buttercream, decorating and cleaning so many utensils, I’ll just make a loaf cake of some sort.

This time, I’ve baked a vanilla and hazelnut-chocolate marble loaf cake. Find the recipe below.

Note: Below’s recipe is for a 3lb tin, but just do some quick maths to adjust the measurements for a smaller or larger tin. My favourite part of the trip took place in La Boqueria. This place was food heaven for me. There are a variety of market stalls there from meat, seafood, vegetables and fruit. Lots of fruit.

I went to La Boqueria on two occasions. On the first day, I tried the fresh fruits, fruit juice and some dried fruits. I came across a stall with many dried fruits, such as apples, mangoes, strawberries, pineapples, bananas. I can honestly say that I dried pineapples are my new favourite snack. No added sugar, but they retain a lot of sweetness. You’d think you’re eating candy to be honest.

The fruit stalls are vast and the pricing is cheap compared to London. You can get a fresh cup of fruit juice for a little as €1.50 if you search hard enough. The same goes for bowls with chunks of fruit such as pineapples, dragonfruit, kiwi, mangoes, strawberries and more. Search hard and you’ll find a bargain.

There are also hot food stalls where you can have anything from paella and empanadas, to churros and pancakes. The options are endless.

And then they have spices from all over the world. But one thing I had to get my hands on was the king of all spices. Saffron. And Spain was the perfect place to buy it from.

The second day at the market was for tackling some savouries. I tried a spinach and cheese empanada which was great; spinach and cheese being one of my favourite combinations. I had some tasty vegetable croquetas as well – it was actually my first time trying these and I wasn’t disappointed at all.

The meal of the day however, was the paella from Ramblero de la Boqueria. Again, this was my first time trying this dish. It came with prawns, squid and mussels (my favourite trinity in terms of seafood), all cooked perfectly. I can’t fault this meal and La Boqueria in general.

I’ve booked a cheeky weekend away back to Barcelona, so I’ll be enjoying the food again quite soon!

I remember first trying the red velvet cake from Costco, maybe seven or eight years ago. I was in food heaven.

These days, however, the sweetness is a little too much. The solution? Make my own! On this occasion, it was my brother’s birthday, so I decided to make this cake for him. He’s a big fan of red velvet too.

The cake recipe in this post was inspired by The Hummingbird Bakery’s Red Velvet Cupcakes. The recipe below uses two 15 cm round cake tins to make it a two-layer cake.

I levelled out each cake before stacking them. I broke down some of the cut off pieces of cake to make into crumbs, and used these to decorate the top. The leftovers were eaten (It’s never good to waste food in my household, and who doesn’t like extra cake?).

For the cream cheese frosting

To celebrate the end of university, a friend and I took a quick day trip to the Netherlands.

Just for some background, I started my degree in Mechanical Engineering in 2014. It’s now 2019 and I’ve completely the four-year Integrated Masters along with a one-year placement. Five years later and I’m free of education!

We have suffered long enough, so it’s time to treat ourselves!

The return flight cost just £49 which was great for our pockets. We landed in Amsterdam before noon and took the typical tourist photographs by the ‘I Amsterdam’ sign outside the airport.

The first place we ate was at a pancake restaurant called Pancakes Amsterdam. The branch we were at was in Amsterdam Centraal.

They have options of traditional Dutch pancakes – sweet or savoury – American style pancakes and Poffertjes (mini pancakes). What’s great is that they have gluten-free and lactose-free options for their Dutch pancakes!

I decided to go for the traditional Dutch pancake with apple crumble, cinnamon and ice cream.

The Dutch pancake alone was fantastic, but topping it off with apple crumble pie? Next level!

The second food spot we went to was a place called Manneken Pis. One of my brother’s suggested I go try these fries and I was not disappointed at all.

The logo may be of a child taking a piss, but don’t be put off. I went for the small portion of fries with ‘Samurai sauce’ – a mayonnaise and ketchup combination with a spicy kick.

The fries were thick-cut (my favourite kind), hot, and very crispy. They reminded me of Kettle Chips in the form of fries, and I love Kettle Chips. I wish they had something on par here in London, because I can’t stop thinking about those fries!

My friend and I managed to do a lot in the space of eight hours including visiting:

Amsterdam and the rest of the Netherlands will definitely need to be visited again – there is so much more to experience. However, my next stop will be Barcelona in July, after graduation! 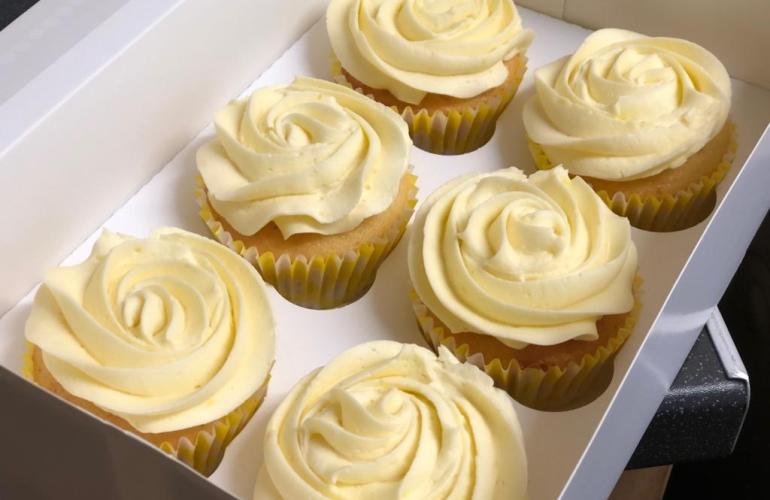 Lemon cupcakes are a great alternative to the classic vanilla and chocolate flavours. Lemon desserts in general are always a solid option in my opinion. They offer not only sweetness, but a tangy citrus to cut through your taste buds.

After vanilla cupcakes, I’d say that lemon cupcakes are the easiest to make. If you’re new to baking, I definitely recommend trying this as a start if vanilla isn’t your thing.

These cupcakes are light, fluffy and quite addictive, so try to eat in moderation! I gifted these to someone for their birthday, and they revealed that they had eaten three for breakfast!

For the lemon buttercream

I have been MIA for 4-5 months, but it has taken a while for me to get back into the flow of university life after spending 2017/18 on a work placement.

It was about time for a makeover, so I’ve acquired a domain, revamped the website and have a new logo courtesy of my good friend (my friends are so talented, honestly).

Over Christmas, I received The Hummingbird Bakery Cookbook from one of my older brothers. There was actually a week in January where I made 4 different cakes. The bakes are so good and very easy to make, so I definitely recommend purchasing this cookbook. It will also save you a lot of money by baking the various cakes, cookies and pies yourselves!

The cake recipe in this post was inspired by The Hummingbird Bakery’s Blueberry Cake. Their version used one 25cm Bundt tin. The recipe below uses two 23cm round cake tins to make it a two-layer cake, and includes a citrus hint from lemons.

For the cream cheese frosting

Tip: lightly coat the blueberries in flour before folding them into the cake batter. This will help slow down the process of the blueberries sinking towards the bottom of the cake.

Before trying out homemade brownies, the store-bought ones were not the best to be honest. I think that’s why so many people I know aren’t the hugest fans of them. I’ve had a few very sickly brownies myself, but that nauseous feeling soon disappeared after tackling these chocolatey treats at home.

I mostly used a combination of dark and milk chocolate for this recipe. I would have definitely added hazelnuts if I wasn’t feeding my friend who has a nut allergy! The good thing about brownies is that you can experiment with a variety of added extras: nuts, nut butters, white chocolate, berries, marshmallows… the list is endless!

Scroll down a little for the recipe.

It’s about time I made a loaf cake.

I didn’t own a loaf tin until last week actually.

I’ve seen many recipes using 2lb loaf tins, but I went and bought a 3lb one because my family can eat.

I do love a banana bread, but I also love to jazz things up. I’ve added chopped walnuts for a nutty crunch, and dark chocolate pieces for pockets of its bittersweet flavour. I was also easy on the amount of sugar because ripened bananas are already sweet as is.

The purchase of a loaf tin may mean I’ll start baking loaves of bread and many more loaf cakes, who knows?

Below’s recipe is for a 2lb tin, but just do some quick maths to adjust the measurements for a larger (or smaller) tin.

Tip: If your bananas aren’t ripe, roast them (unpeeled) in the oven for 20 mins at 180ºC (160ºC fan)/ gas mark 4. The skins should be black. Peel and mash them up as usual, but leave to cool before adding to the cake batter.

Here’s another cupcake recipe for you all to enjoy –  this time, it features the use of Nutella (or any other generic hazelnut-chocolate spread). The cake includes cocoa powder, chopped roasted hazelnuts, and a surprise Nutella centre. Buttercream is a mixture of vanilla and Nutella, and topped off with more chopped hazelnuts for an extra crunch.

So far, I’ve got three solid cupcake flavours, and I need some more to add to my collection. Feel free to let me know of any flavour combinations you’d like to see!

Check out the recipe below:

I made these cupcakes along with my Oreo and Nutella cupcakes for Macmillan Coffee Morning at work. They received great reviews from colleagues, despite this recipe being an experiment!

The cake itself is a pretty standard pound cake, but with a few extra flavours. The buttercream used is Betty Crocker’s vanilla buttercream. I used the Wilton 2D Drop Flower nozzle to pipe the buttercream onto the cupcakes.

Honestly, making 36 cupcakes with only 1 12-hole cupcake tray, a wooden spoon, a bowl, and a whisk (nope, not an electric one), took so much time and arm power. There was no way I was going to make buttercream by hand. I’ve made it by hand before, and mixing took a lifetime – I prefer to train arms at the gym, not in the kitchen!

(P.S. Friends, when we do Secret Santa this year, I’m asking for baking equipment…)

Anyway, enough of my waffling. Here’s the recipe: